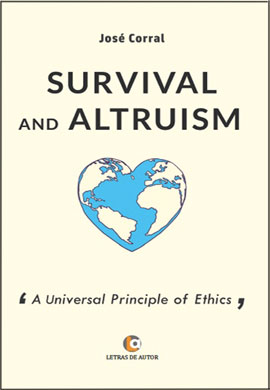 This book develops a basic hipótesis: Like all known species of living beings, our own, Homo sapiens, has implicitly the priority vital goal of surviving and the imperative duty to try to survive, other ends and goals notwithstanding.

Based on this idea, and the idea of altruism/love as a working tool, the author believes that a universal code of ethics can be worked out as follows: is Good/Better, when done altruistically, that which is Good/Better for the survival of the species.

These concepts, once contrasted and verified, resolve some of the pending questions in the history of evolution. They sustain a base or foundation for the universal ethics that our Humanity, and each one of its groups and individuals, need with the upmost urgency.

He dedicated all his professional life to banking until he retired as management in 2001 and as a member of the Board in 2006.

He is married and has three children and two grandchildren.

His economics studies curricula included philosophy and sociology but he's not an expert in biology.

This book may lack the use of specialized language. Even so, experts and multidisciplinary minds alike can understand the ideas stated here.